In search of the best home-made pop tarts

The concept of pop tarts is a nice one. It’s a crust on the outside with a sweet filling, most often a fruit filling, inside. In reality, store bought pop tarts are usually too sweet, bland (aside from the sugar), contain almost no real fruit, and have little to no protein.

My mom never bought pop tarts for us when I was little, thank goodness, but the idea is something that has appealed to me, both as a kid and as an adult.

Over the last two years or so, I’ve been looking for a good recipe for making home-made pop tarts. I’ve been searching for and trying different recipes I’ve found online but have been only disappointed. I tried this recipe but the butter content was too high and when I ate one I got a stomach ache — something that rarely happens. In the comment reviews I read for that recipe someone suggested halving the butter and adding a flax seed-water mix. I liked the idea of adding flax seed. And why not add some wheat germ too.

If I could make a pop tart I’d want it to be healthful, filling, non greasy, and just sweet enough without being sugary. I’d want the crust to be more of a pastry-bread consistency rather than a greasy pie crust.

So I’ve decided to put together my own recipe based on my experiences with cookies, breads, and cake recipes, and what I think would taste good as a pop-tart. A couple of weeks ago I took four recipes — two for pop tarts I found online, one for a sweet bread, and one for a cookie dough — printed them out and got to work creating the best combination. Since I wanted the highest protein content possible, I went with whole-wheat flour, flax seed, and wheat germ. I added some sugar to the dough to make it slightly sweet but stayed away from butter and instead went with a small amount of canola oil.

After I created the crust, I thought about fillings. I wanted to try mixed berries, apples with honey and crushed walnuts, and a Nutella-banana combination.

I thought about brushing on an egg wash on top and then sprinkling a bit of cinnamon-sugar, but I decided that since these are meant to be held in a hand (by little kids who may or may not be eating one in the car on the way to school), I wanted them dry and not dropping sprinkles all over the place. 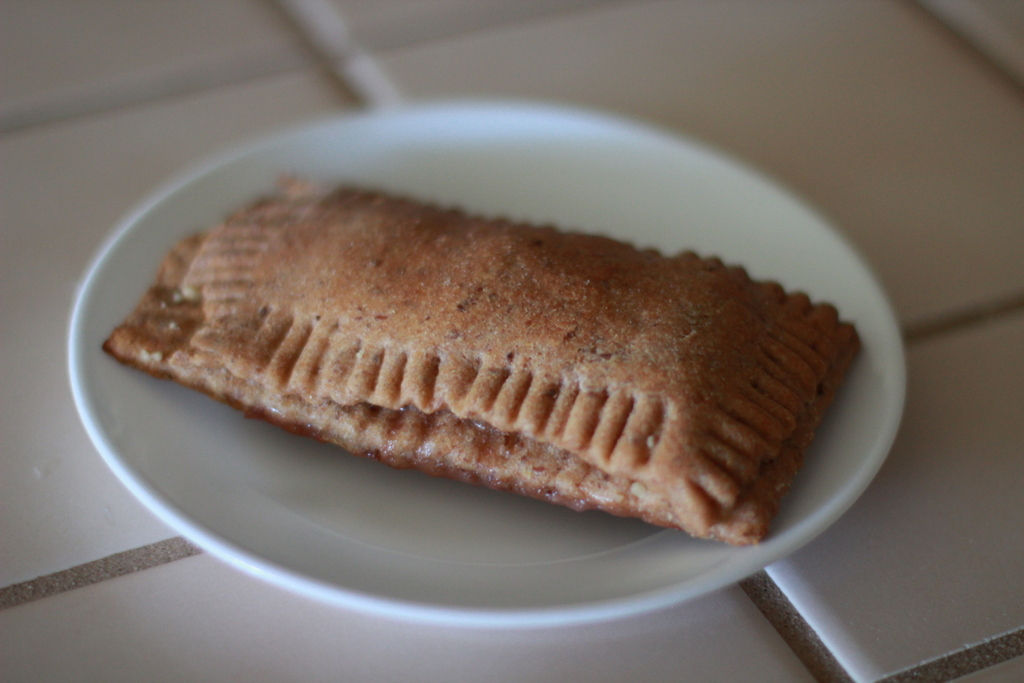 I made the dough, rolled it out and filled them. After they baked I noticed they were very large so made a note for the next time to make them smaller. The taste? Delicious. The crust portion was made using mainly a sweet bread recipe. I used yeast so the crust puffed slightly.

The family tried all three fillings and the absolute hands-down winner was the Nutella-banana.

I think I’ve succeeded in making something that is filling and nutritious enough that you wont feel guilty by eating one. And taking one in the car works pretty well, for mom or child.

Another day I made them again and tried nectarines with walnuts and honey as a filling.

The plan is to make enough to be able to keep some in the freezer and warm them up as needed. I have frozen pancakes, frozen waffles, why not frozen pop tarts?